First They Came for the Minùtemyn Volume I: We Call Them Hillebaîm - Fantasy Novel 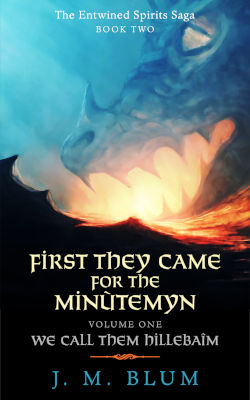 This is the tale of Gavríæl Kheruvím, a young mage commando travelling behind enemy lines to work with minùtemyn guerrilla fighters hiding in dæmyn controlled hills. Hidden from the enemy in secret caves, the narrator paints in third person limited form a magixial portrayal of the challenges of community, ideology, bravery, tragedy, and love. From this portrayal of Kheruvím’s love for the beautiful young dæmyn, Lîlît, to the travesty of The Day of Terror, this work is at once filled with action and battle, tenderness, and humour. First They Came for the Minùtemyn is not your average fantasy novel. Instead it is an emotionally gripping powerful tribute to anti-fascist ideals.

J. M. Blum’s enthralling work, First They Came for the Minùtemyn Volume I: We Call Them Hillebaîm, is the second book in the Entwined Spirits Saga. This story is what it means for heroes to sacrifice in the face of death.

This fantasy series uses rich and powerful imagery. It describes the eternal struggle of love and mortality between the Trueborn ærendmyn, Gavríæl Kheruvîm, and sultry arch-demon, Lîlît Gamaliel. Each book is set in the magical fantasy world of Sefirot. These are standalone modern literary myths embedded in an overarching epic of unconscious desire, repression, and transcendence. Filled with mythical creatures, they draw from rich traditions of sacred writings, spirituality, Kabbalah, Angelology, and Demonology. Fans of fantasy, fantasy gaming, gamelit, myths, folklore, and legends will love this series for years to come.

Out now… The first book in the Entwined Spirits Saga: The Forbidden Dæmyn

Coming soon… The concluding volume of First They Came for the Minùtemyn: Heroes of the Time

First They Came for the Minùtemyn, Volume I - We Call Them Hillebaîm

Short Story - The Emperor and the General